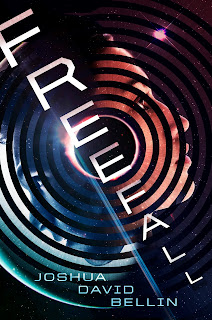 It seems like forever ago that I first conceived this book--and in fact, I originally drafted it back in 2013, the first time I participated in NaNoWriMo. Then there was the year I set it aside to work on other projects, then the year of revising, then the acceptance by my publisher in early 2016, then the interminable wait for the actual publication.... But it's here now, and I hope you'll agree it was worth the wait!

To celebrate the release of FREEFALL, here are some things you can do:

Adventures in YA Publishing

You can also take a picture of the book and post it to social media, or help spread the word by tweeting, reblogging, chatting with friends, or whatever. If you post a picture of the book online and tag me to make sure I see it, I'll send you one of these cool prop-replica packs as a thank you! 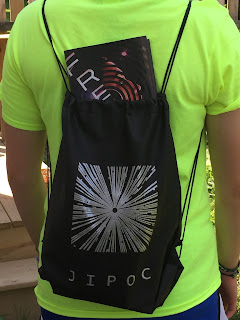 I hope you enjoy FREEFALL, and thanks for helping me launch it to the stars! 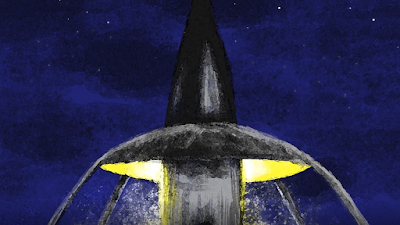 Posted by Joshua David Bellin at 8:43 AM 4 comments:

YA Guy Creates... A FREEFALL Glossary!

It's less than two weeks until the September 26 release of FREEFALL, and YA Guy's getting excited!

Since FREEFALL takes place in the twenty-second century, lots of things have changed in terms of politics, culture, technology, and media—and the language has adapted to reflect those changes. Here's an alphabetical list of some of the terms that have arisen in the world of Cam Newell and Sofie Patel. (Italicized words can be found in the list.)

Adjournalist: a paid propagandist who circulates falsified news accounts in the financial interest of one or more of Earth’s corponations.

CanAm: an Upperworld corponation, responsible for administering the former nations of North America.

Catastrologist: a combination of meteorologist and mystic who predicts future outcomes, typically of a catastrophic nature, at the behest of one or more of Earth’s corponations.

Centurion: a biomechanical soldier employed in outer space by JIPOC.

Chatshow: a talk show on the worldlink, offering viewer interactivity through selfone interface.

Classification: a corponational training program for all Upperworld children, taking the place of the banned public and private educational systems.

ColPrep: an abbreviation for Colonization Preparation, the physical and mental training regimen required of Upperworld residents chosen to depart Earth on a mission to colonize outer space.

ConGlo: a Lowerworld corponation, responsible for administering the former nations of Central Africa.

Cons Piracy: a rogue group of computer hackers who attempt to leak top-secret data held by one or more of Earth’s corponations.

Corponation: a corporate entity that has taken over the functions of government (territorial management, population control, distribution of wealth, etc.) and that operates on a for-profit basis.

Data Recruitment Specialist: an Upperworld technician who performs the functions of a scientist, engaging in corponation-funded research to support profitable initiatives.

Deepsleep: a form of suspended animation, developed in part by Cam’s mother, that enables deep-space colonists to survive voyages much longer than the span of a human life.

ExCon: an Upperworld corponation, responsible for administering the former nations of western and northern Europe and Russia.

Funding Fathers: the revered ancestors who established the underlying principles and secured the original financial security of the Upperworld.

INTERCOLPA: the Intercorponational Colonization Protection Agency, responsible for overseeing security surrounding the deep-space colonization mission and for deporting or incarcerating perceived threats to the mission.

JIPOC: the Joint Intercorponational Panel on Otherworld Colonization, the Upperworld conglomerate that pursues and finances the mission to colonize space.

Lowerworld: the 99% of the world’s population that lacks access to wealth and basic resources, geographically separated from the Upperworld.

MediTerri: an Upperworld corponation, responsible for administering the former nations of southern and eastern Europe and North Africa.

MexSanto: a Lowerworld corponation, responsible for administering the former nations of South and Central America.

Nanoserum: any of a number of nanotherapies delivered through injection.

Peace Corp.: a private paramilitary force employed by Earth’s corponations to suppress individual liberties and political activism in the Upperworld and Lowerworld.

Plutocrats and Publicans: two defunct political parties from the waning ages of the old world, when governments rather than corponations ruled the planet.

Privacar: a privately owned vehicle, extremely rare due to its financial and environmental impacts and thus the prerogative solely of the super-rich.

Selfone: an advanced version of a cell phone, providing instant access to the worldlink along with other functions.

SubCon: a Lowerworld corponation, responsible for administering the former nations of southern Asia and the Indian subcontinent.

Techgame: a video game played on the worldlink, with full immersive VR and interactivity among multiple players engaged with each other either synchronously or asynchronously.

Terrarist: an individual or member of a group who engages in violent political resistance, ostensibly in the interest of preserving the planet Earth (Terra).

TranSpeaker: a hovering device that enables speakers of different languages to communicate.

UniVers: an Upperworld corponation, responsible for administering the former Australia.

Upperworld: the 1% of the world’s population that has monopolized access to wealth and essential resources, and that plans to abandon Earth to colonize outer space.

Worldlink: the twenty-second century equivalent of the internet, providing entertainment and indoctrination on public channels, and strictly regulated to prevent unlicensed content from being viewed by the general population.
Posted by Joshua David Bellin at 5:58 PM 2 comments:

Email ThisBlogThis!Share to TwitterShare to FacebookShare to Pinterest
Labels: Freefall

Well, let's clarify that. I don't have a problem with ARCs as such. In fact, it's kind of thrilling to see your book in physical form for the first time, even if it's a flimsy paperback and the text will probably undergo changes ranging from minor to ginormous before the actual book is published. I understand, too, why others like ARCs: a chance to read and review a book before it's on the shelves. Some people collect ARCs. And publishers keep churning them out in hopes of generating buzz and early reviews.

But I've got to tell you, my personal experience with ARCs has been an exercise in frustration.

With FREEFALL, I received about 20 ARCs (not to mention the digital ARCs on NetGalley). Being a good boy, I sent out emails to various reviewers in my genre, asking if they'd like a physical or digital ARC. Many reviewers responded enthusiastically, so I sent them the ARC of their choice. Then I sat back and waited for the reviews to roll in.

I got a few reviews, sure. Some were very positive, some weren't. That's life. The not-so-positive reviews aren't what I'm annoyed about.

It's the people who don't review the book at all. Ever.

I sent follow-up emails to those who'd requested an ARC. Several responded with firm or tentative review dates. Most, however--if they responded at all--told me that they were too busy to review, or something had come up, or they'd changed their minds. No review for you, kid. Sorry, better luck next time!

This bothers me. And not because it signifies that I'm not a big enough name to merit instant reviews. For all I know, this happens to everyone. But it shouldn't happen to anyone.

Look, I'm busy too. Things come up for me. And I have been known to change my mind from time to time.

But when someone asks me if I'll review their ARC and I agree to do so, I review the darn thing. I recognize that it costs the author (or somebody) money to mail me that ARC, and I also recognize that if I take it, someone else who might have reviewed it doesn't get it. If I'm honestly too busy or foresee that the book's not quite up my alley and I might change my mind about reviewing it, I tell the author or publisher not to send it to me.

We all know of the dishonest things that happen with ARCs. Some people request them only to sell them online. Others, even worse, digitize them and then give them away on free download sites. I can't do anything about those people, who are either outright crooks or just plain jerks.

But to the people who are less criminal than inconsiderate, I'd ask that you remember the investment the author makes in her or his writing, along with the expectation that's attached to the ARC she or he sent to you. It's not a formal contract, of course. You're not REQUIRED to read and review it. If the author was the one who made the initial overture, you might think you have no real obligation to review it. But wouldn't that be the right thing to do? The nice thing to do?

In any event, I think I've finally wised up. For my next book, I'll either survive without ARCs or go digital only. I really don't have the time or money to be shipping books to people who plan to use them only to prop up the furniture.
Posted by Joshua David Bellin at 10:16 AM 2 comments: