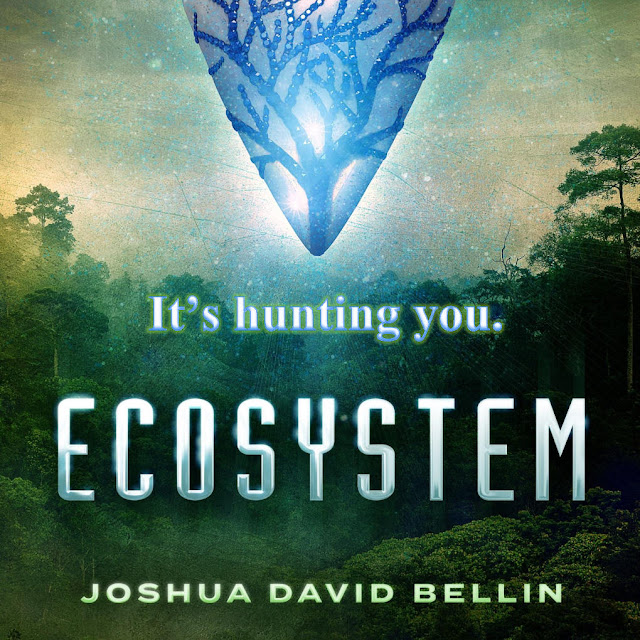 YA Guy's self-published novel Ecosystem came out last month. A survival story set on a future Earth in which the physical environment has evolved into a sentient predator, it's on sale for only 99 cents through May 25, if you want to check it out.

Ecosystem isn't the first novel I've self-published--that distinction goes to The Passing of Boss Krenkel, which came out several years ago--but it's the first self-published novel I've taken seriously. I splurged a bit on cover and interior design, and I'm doing much more to market the book than I did with Boss Krenkel. I don't expect to become a millionaire on this book or any self-published book--but then, I wasn't becoming a millionaire on my traditionally published novels, either. I do, however, see Ecosystem (which is the first in a three-book series) as the start of what might turn out to be a viable alternative path for me as a writer.

The decision to take the self-publishing route is a personal one, and I'd never be one of those writing-advice gurus who tell people that the ONLY way to go is to self-publish. (By the same token, I wouldn't tell anyone that traditional publishing is the only legitimate option.) Having experienced both forms of publishing, I can confidently state that they both have their advantages and disadvantages. I won't belabor the obvious, but I will take a few moments to talk about the three major factors that appeal to me about self-publishing.

1. Creative control. This is huge for me, as it probably is for most authors who self-publish. To start with, I like the idea of not having anyone tell me that a story concept that intrigues me isn't "marketable" enough or doesn't fit into a convenient category. Ecosystem is an ecological, post-apocalyptic survival story with elements of both science fiction and fantasy, featuring a teen protagonist but possessing crossover adult appeal. That might be a hard sell for many, possibly most, traditional publishers. By self-publishing, I can forego these gatekeepers and put out a book that's close to my heart as a writer. I did hire a freelance editor--I think every self-published writer owes it to themselves to do so--but in the end, the final decision about form and content was mine; I didn't need to convince anyone that my creative vision was sound, or argue with anyone who didn't like a choice I'd made. I'm not going to badmouth anybody, least of all the editor for my first three books--who undeniably made those books better than they were when they left my hands--but I felt the need to spread my creative wings and venture out on my own, and through self-publishing, I had that opportunity.

2. Speed. Traditional publishing is incredibly slow. It was two years between the two books of my Survival Colony series, which is an awfully long time to wait. With self-publishing, I can make books available to readers as quickly as they can be written, revised, edited, designed, and published. Ecosystem came out in April, I'm currently preparing a collection of science fiction short stories for publication no later than July, the sequel to Ecosystem will appear by November, and the final book in the trilogy will be available by early 2019. Putting books out quickly isn't necessarily a good thing in itself, but as with my desire to control my books creatively, I like having the power to control when and where they appear.

3. No pressure. For me, this is probably the biggest benefit to self-publishing. As a writer, I hate pressure: the pressure of external deadlines, the pressure of other people's expectations, the pressure to sell large numbers of books. Maybe some writers thrive under such pressures; I find that they kill creativity and strip the joy out of writing. I've wanted to be a writer since I was six years old--and I've wanted to be a writer because I love telling stories, not because I want to become rich and famous. But in traditional publishing, the pressure to meet certain standards or hit certain targets is always there, whether that be the pressure to "earn out" your advance, to have a new book ready to satisfy the option in your contract, or to "outperform" your previous books. With self-publishing, the only pressure I feel is internal, and it's a good pressure: the pressure to tell the stories I want to tell, the way I want to tell them.

At this point, it's too early to say which direction I'll ultimately take as a writer--whether I'll go hybrid, self-publishing some books and traditionally publishing others, or whether I'll settle into self-publishing exclusively. For the time being, I'm still working with an agent on some of my projects, including one that she's shopping around right now. I'm not fretting about the future; I'm just enjoying the moment. And I hope, if anyone out there is weighing the possibility of self-publishing, this post will help you to make your decision.
Posted by Joshua David Bellin at 8:44 AM 1 comment: