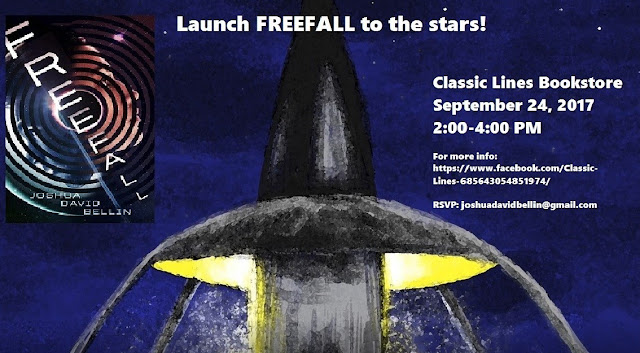 YA Guy's newest science fiction novel, FREEFALL, hits the shelves next month (September 26, to be exact), so I'm celebrating a few days early with a launch party on September 24. If you're in or near the Pittsburgh area, please stop by--there will be good conversation, signed books for sale, food and drink, and cool giveaways (I promise).

Hope to see you there!
Posted by Joshua David Bellin at 12:15 PM No comments:

YA Guy recently finished reading Frank Herbert's DUNE--all 900 pages of it--and it made me think about other really long books I've read in the past. Since I'm gearing up to read two additional epics--THE HUNCHBACK OF NOTRE DAME and DON QUIXOTE--I thought it would be fun to post mini-reviews of ten previous examples, listed in order from best to worst.

1. THE LORD OF THE RINGS. My favorite book, hands down. I've read it four times throughout my life--once when I was twelve, once during graduate school, once when I taught a Tolkien course to college students, and several years ago just for the heck of it--and I never tire of it. I confess, in my most recent reading, I found the elevated diction and inverted syntax ("Lo! Then did the Lord Aragorn come unto the Plains of Pelennor, and he was as one that was wroth!") a bit forced. But the story, the characters, and most of all the unparalleled world-building were as impressive to me as they were back when I was a kid.

2. DUNE. Another long book I loved as a teen and decided to re-read as an adult. I found it really slow-moving this time around; the first third is pretty much prelude to the uprising that kicks the story into gear. And hero Paul's unflappable, messianic self-confidence was a bit hard to take. But as with Tolkien, Herbert has to be credited for one of the greatest feats of world-building--or universe-building--of all time.

3. ULYSSES. I started Joyce's epic in 1990 and finished it in 2015. But no, it didn't take me 25 years to read it; I started it for a class in grad school, then stopped midway through once the semester ended and never picked it back up until 25 years later. Undeniably a great book, earthy and funny and sensual and smart, with enough daring, dazzling narrative choices to fill up a shelf-full of novels.

4. TOM JONES. This 1000-plus page picaresque is at once an early masterpiece of the novel form and a parody of the same; it pretty much defined postmodernism 200 years before that was a thing. I read it in grad school and don't remember many of the details, except for the fact that the hero kept getting into various affairs and peccadilloes and the author kept commenting on his own book. But I do remember that it kept me entertained for a solid month, and that's something.

5. GONE WITH THE WIND. Yes, it's racist as hell, and I would never excuse or rationalize that racism the way some people do ("oh, everyone was racist then, so it's not a big deal!"). I would say, however, that as a glimpse into the mind of the South, both antebellum and postbellum, it can't be beat. And Scarlett O'Hara remains one of the great fictional inventions of all time.

6. SHOGUN. I read this way back in high school, after I'd watched the miniseries. It's hard for me to recall from all those years back exactly what I thought about it; I don't think I understood it all that well, and I really had (and have) no idea if its representation of feudal Japan is at all accurate. But I remember that the story kept me engaged, and the characters, both Western and Japanese, struck me as simultaneously realistic and of epic proportions, which isn't an easy balance to strike.

7. PARADISE LOST. The only poem on this list, Milton's masterpiece was another book I was required to read in my Ph.D. program. It's not all that long in terms of page or word count, but the difficulty of the language and the complexity of the theological ruminations make it a book that feels much longer than it is. (That's not necessarily said in a negative way.) Of the central quartet of characters, Adam is a shallow pretty boy, God is a vengeful whiner, Eve is an interesting early example of a woman straining against the bonds of patriarchy, and Satan is a recognizably human and sympathetic villain.

8. CATCH-22. I received this book as a prize in college for an essay contest I won, but I didn't read it until a few years ago. I definitely get what Heller was up to, taking the "good war" and making it every bit as pointless, absurd, and depraved as every other war. But the darn thing is so chaotic and fractured, it took me forever to read. And I didn't feel that I connected with it until near the end, when we finally discover what Yossarian witnessed that drove him mad.

9. MIDDLEMARCH. Yet another massive novel that was required of me--or, in this case, inflicted on me--during grad school. I know many people love this book and its self-actualizing heroine, but I found it plodding, dull, and almost impossible to finish. It was ironic, I thought, that Eliot presented Casaubon's Key to All Mythologies as such a tedious, self-indulgent venture when, to me, her own novel felt very much the same.

10. GAME OF THRONES. Without a doubt, the worst long book I've ever read. I'd heard so many people raving about it, I felt I had to read it--but when I did, I discovered that it wasn't at all what I'd been led to believe. An epic fantasy? What's epic about it? And where's the fantasy? There's a wraith-like creature in the first few pages, and a baby dragon on the very last--and then, for the rest of the book, there's nothing but court intrigue and royals engaging in love affairs and other questionable behavior. Who cares about these people? And why did the author decide to kill the one character I had started to care about in the slightest--Ned Stark--in the most pointless, trivializing way possible? Add to that sexagenarian Martin's creepy fascination with nubile nymphet Daenerys Targaryen's genitalia and the various things that can be inserted therein, and this book was complete and total trash, basically soft-core porn masquerading as fantasy fiction.

So that wraps it up. Any suggestions for other really long books I should sink my teeth into? As I said, I've already got Hugo and Cervantes on tap, but I should be ready for something new by the middle of 2018 or so!
Posted by Joshua David Bellin at 9:00 AM No comments: