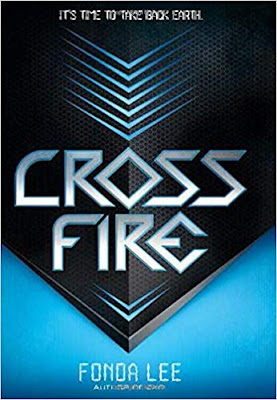 YA Guy's favorite YA science fiction author is Fonda Lee.

There. I said it.

While I like and admire lots of YA science fiction writers--Paolo Bacigalupi, Amie Kaufman, AdriAnne Strickland, Parker Peevyhouse, M. T. Anderson--Lee is at the top of my list. I've loved all of her sci-fi books, starting with ZEROBOXER and moving on to EXO and, now, CROSS FIRE. (I'll confess I didn't get into her fantasy novel JADE CITY, but that's not a reflection on its quality; it just wasn't my type of story.) I love her world-building, character development, eye for action sequences, and--in particular--her willingness to explore moral problems without settling on simple answers. In too much YA sci-fi, the world is neatly divided into nefarious (often adult) villains and virtuous (typically teen) heroes, who might have some superficial character flaws but who always manage to do what's right in the end. In Lee's books, the picture is much more complicated.

Take CROSS FIRE. It's the sequel to EXO, which featured a future Earth colonized by the alien zhree. Unlike most races in alien-invasion narratives, the zhree didn't come to destroy Earth but to colonize it and, to some extent, to share their superior technology with the human race. Thus they've rebuilt Earth's cities, incorporated many of Earth's citizens into their government and trades, and biologically enhanced a select group of human beings, including main character Donovan Reyes, to share the zhree's virtually indestructible battle armor. But there are some people, including the radical group Sapience, who hate the zhree and those humans who work along with them. Sapience wants to take Earth back, and they'll fight and kill to do it.

With this kind of premise, it's hard to draw clean lines between the "good guys" and "bad guys." Sapience is viewed by many in Donovan's world as a terrorist organization, and there's validity to that viewpoint--but at the same time, their admirable desire for human independence complicates the reader's response to them. By the same token, if the zhree seem generally willing to share their technology and their resources with humanity, there's no doubt that humans are second-class citizens in zhree society, and that becomes all the more apparent in CROSS FIRE, where the zhree decide that Earth is too costly to maintain and make plans to evacuate, knowing full well that their departure will leave the planet vulnerable to other alien races bent on the annihilation of humankind. Under that scenario, Donovan is faced with a wrenching choice: to stay behind on a threatened planet in order to defend his own species, or to accept the zhree's offer to take a tiny percentage of the human population, himself included, with them.

It's just at this point in the narrative, though, that I feel Lee adopts a course that reduces some of the moral complexity she's established. I don't want to give anything away, but suffice it to say that the book takes a turn at its approximate midpoint that makes Donovan's choice no less physically demanding but somewhat less ethically challenging. Later in the book, a second turn--one that, like the first, hinges on the sudden appearance of a fresh threat just at the moment of a critical decision on Donovan's part--similarly serves to draw somewhat cleaner lines between heroes and villains. I wonder how Lee would have worked out the issues she set up if these plot twists had not occurred, and whether that resolution would have been more morally murky but intellectually satisfying.

That being said, I loved CROSS FIRE and found it in some ways even better than its predecessor (which is rare for sequels). If you're interested in reading Lee's book, leave a comment on this blog post; I'll be giving the book away to one person chosen at random from the comments.
Posted by Joshua David Bellin at 10:24 AM 7 comments: 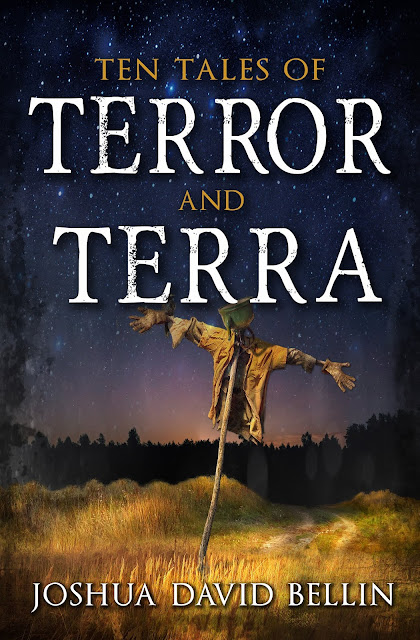 Way back when, before YA Guy was (officially) YA Guy, I published short stories--science fiction, horror, and fantasy mostly, though occasionally I'd dip into contemporary realism. Short fiction was my way of getting back into writing after a long hiatus, and it was incredibly rewarding to finish a story and, from time to time, see my name in print.

Though I've focused on writing novels in the years since, I've felt for a long time that it would be fun to collect some of my short stories--most of them originally published in obscure places that are hard to track down--for readers to enjoy. Thanks to my recent discovery of self-publishing, I've done just that, and I'm happy to present the result: TEN TALES OF TERROR AND TERRA, an e-book collection that's available for free on Amazon, B&N, and other online bookstores.

Of the ten stories, one or two might be considered YA--at least, they have youthful protagonists. But for the most part, the stories are aimed at a mature readership (which is not to say they're full of sex and graphic violence!). Some of them experiment with language, such as an apocalyptic tale told from the point of view of a non-human character and a horror story about a man who's losing his ability to speak. Others are fairy-tale adaptations, including the lead story, "Scarecrow," which is narrated by the straw man from The Wizard of Oz. There's a deep-space colonization narrative, a story about demonic possession and/or madness, a tale (narrated in the second person) about the invention of a technological afterlife. There's some pretty cool stuff, I think.

And, like I said, it's free. So pick up a copy, and enjoy!
Posted by Joshua David Bellin at 9:07 AM No comments: