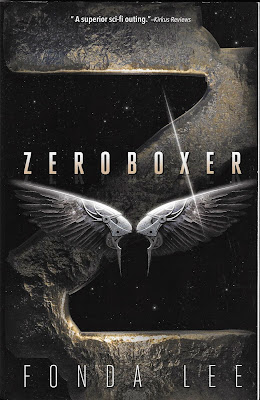 Fonda Lee's debut not only delivers some amazing fight sequences--conducted, as the title indicates, in zero gravity--but constructs an excitingly original science fiction world set on Earth, Mars, and a lunar colony. The story, which concerns the rise of young Terran zeroboxer Carr Luka to the pinnacle of his sport--and the secrets and lies that threaten to tear him down--is told with the directness and visceral energy of a boxing match, while the subplot concerning Terran/Martian tension and prejudice provides a reflective backdrop to the whole. Carr himself, and the cast of characters surrounding him, are all sympathetically rendered--especially Risha Ponn, an expatriate Martian who works as Carr's marketing strategist and who becomes his romantic interest. Lee's writing is clean, her plotting seamless, and her visualization of what sports and sports marketing might look like in the era of space colonization utterly convincing. Here's a sample, from a scene where Carr encounters some diehard fans:

"They all grinned. How childlike they seemed. They were teenagers--one or two of them looked eighteen or nineteen, around Carr's own age--but to him, they all looked like [his fan] Enzo, silly with enthusiasm. This was fun for them, traveling all the way here, sharing in the fandom, getting close to the drama of the [fighting] Cube and the fighters they'd seen in holovid. Zeroboxing defined Carr's life, in every way, good and bad, ecstatic and heartbreaking. He'd given his entire childhood to the sport. It had made him and aged him. But to them, it was all entertainment."

Like many reviewers, I usually point out something I didn't like about the books I review. But in the case of Zeroboxer, I'm honestly drawing a blank. Lee's terrific debut should be on the reading list of anyone who enjoys genuinely kick-butt YA sci-fi action stories.
Posted by Joshua David Bellin at 4:29 PM 2 comments:

YA Guy Reviews... WE ALL LOOKED UP by Tommy Wallach! 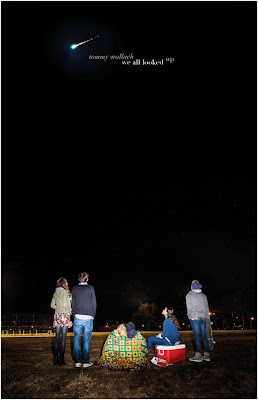 That's exactly what Tommy Wallach's WE ALL LOOKED UP is. The story of Seattle teens whose lives are irrevocably changed when reports emerge of an asteroid on a fatal collision course with Earth, this novel deals not with the aftermath of the collision but with the build-up to it. (Spoiler which isn't really a spoiler: we never learn if the asteroid actually hits.)

What we do learn is how people, and especially young people, respond when their life expectancy is radically shortened by forces beyond their control. Some, predictably, give up. Others freak out. Some decide to fulfill unfulfilled dreams (singing on stage, dating a secret love). All, however, are changed by their realization of the ephemeral nature of life.

Wallach writes well, in a nicely controlled third person that jumps among his central quartet of characters: athlete Peter, who's begun to wonder whether prowess on the court is really all it's cracked up to be; photographer Eliza, whose father is dying and who fills the emptiness inside her with a series of meaningless sexual encounters; over-achiever Anita, who chafes against the life her parents have planned for her; and slacker Andy, who spends most of his time getting high with his dangerous and unpredictable friend Bobo. Watching the lives of these characters intertwine is what gives the book most of its considerable narrative drive. And it's nice to read a YA book that isn't afraid to philosophize and to touch on subjects of spirituality and ultimate purpose.

There are a few things about WE ALL LOOKED UP that are less successful. The book's second half is devoted in large part to an implausible rally-and-prison-break that seems to serve little purpose other than to generate artificial danger and thus hasten the development of romantic relationships. And the author's understanding of teenage girls is often badly off the mark, as for example in this head-scratch-worthy observation:

"Eliza was getting a distinct passive-aggressive vibe off Anita, and she had no idea why. It wasn't as if they were competing or something. Neither of them were interested in Andy, and Eliza was as bad at singing as Anita probably was at taking photos. Maybe it was inevitable--one of those rivalries that so often sprout up between girls, like mushrooms in the crevices of a forest, craning up toward whatever attention filters down through the canopy."

But Wallach is young, and one hopes he'll outgrow such sophomoric stuff. I recommend WE ALL LOOKED UP to those who want an original take on the end of the world.
Posted by Joshua David Bellin at 10:28 PM No comments:

Email ThisBlogThis!Share to TwitterShare to FacebookShare to Pinterest
Labels: book reviews, We All Looked Up

YA Guy Talks about... Sequels!

YA Guy hasn't posted in a while, and there's a simple reason for that: I'm working on revisions to my sequel. (The title of which is no longer Skaldi City, but I'm not ready yet to tell you what the new title is.) Chances are I won't be posting much throughout the month of May.

Sequels are weird. Everyone says they're harder to write than the first book, and everyone is right.

I can think of lots of great sequels, books (and movies) that matched or surpassed their originals: The Lord of the Rings, Terminator 2: Judgment Day, The Tombs of Atuan, The Illearth War. I can also think of plenty of sequels that disappointed me for one reason or another.

But until you write one, you don't really realize what you're getting into. You've got to extend the story that started in the first book, keeping things consistent yet taking the narrator and other characters into entirely new places. You've got to expand and enrich the world, revealing information that wasn't evident in the first book (but that appears to unfold naturally from what was provided in that book). You've got to find the right balance between filling in what came before (for new readers) and assuming a certain familiarity (for returning readers). You've got to up the stakes, complicate the situations, heighten the tension, and pretty much blow every reader's mind, new or returning.

Oh, yeah, and you've got to tell a good story while you're at it.

Maybe this is why my sequel has gone through three distinct phases. In the first phase, it was a mess. I didn't know what the heck I was doing, and I went in a direction that simply wasn't workable. I basically had to jettison 80% of that manuscript and try again almost from scratch.

And now we're on to phase three, which contains the 20% from phase one and the 60% from phase two. But it's not as if I could just stick those two chunks together and add another 20% to produce the 100% I need to have a complete manuscript. No, I'm having to rethink the whole thing yet again--not only to reconcile the disparate parts but to transcend them, to produce something better than either of the previous two attempts.

Survival Colony 9 went through multiple revisions too. But though some of those revisions were substantial--chapters moved around, character relationships altered, and so forth--none was as substantial as each of the major revisions I've undertaken with book two.

I'm happy with where the manuscript is going right now (though I still have lots more to do). I not only hope but believe it'll be at least as strong a book as its predecessor.

But after I'm done, I'm going to stick with stand-alones for a while. YA Guy needs a break.
Posted by Joshua David Bellin at 9:32 PM 3 comments: