As you've probably already figured out, YA Guy's kind of old-fashioned. (Which is another way of saying that YA Guy's kind of old.) I didn't encounter a computer until senior year in college. I don't own a cell phone. I'm on social media, sure, but I don't use it to flog, bully, and ridicule other people.

Which, it seems, is the purpose to which all too many put it.

Turns out lots of things can go wrong.

Right at the start, one participant denigrated dystopian literature--particularly YA dystopian--and those who read it. In no time, others jumped in either to defend the genre and its readers or to pile more ridicule upon their unsuspecting and inoffensive heads. Someone used the occasion to make a scurrilous remark about liberals (?), whereupon someone else berated that person for bringing politics into the forum. A couple of times, calmer heads tried to steer the discussion back on track or to suggest gently that different readers have a right to their own likes and dislikes, but to no avail. The troll train had left the station, and it wasn't about to be turned back.

I don't know why people like to attack other people online. I guess the relative anonymity (and hence safety) of computer-mediated discourse brings out the worst in some folks. Or maybe it's just a game for certain people (though why flinging profanities at perfect strangers should constitute some kind of game is beyond me). Whatever the case, in YA Guy's esteemed opinion, this kind of behavior is just plain cruel and pointless.

On Facebook--which, dinosaur that I am, is my favorite social media platform--I have a policy: I don't argue with other people's posts, and I don't permit argument with my own. On the rare occasion that someone violates this policy by calling me a pointy-headed liberal or whatever, I remove their comment and post a reminder that I don't abide such incivility in cyberspace, just as I don't abide it in face-to-face contacts. Life's too short, and damage too easily done by words as surely as fists, for me to engage in shouting contests on the computer screen.

So I'm here to make a plea for restraint in online discussions. Try to be nice to others. If you must disagree, do so respectfully. What purpose is served by adding to the sum total of vitriol in the world?

And if you find yourself posting a nasty response to this column, be assured that your words will be deleted by your friendly neighborhood dinosaur.
Posted by Joshua David Bellin at 2:25 PM No comments:

YA Guy Gives Away... FREEFALL Swag!

YA Guy's got some very cool FREEFALL swag I'm just dying to give away to readers! This includes an item modeled on a scene in the book where the narrator, Cam, dons a backpack imprinted with the logo of JIPOC, the company that finances a deep-space colonization mission that goes horrendously wrong. Here's an image of the replica bag: 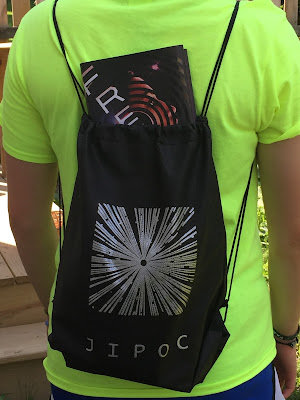 From now until I run out, I'm giving away this bag, filled with other FREEFALL goodies, to anyone who tweets a picture of the book. Here's what you have to do to claim your swag:

--snap a picture of FREEFALL in a bookstore, a library, your own bookshelf, or wherever else you like

--tweet the picture, using the hashtag #Freefall and making sure to tag me so I see it @TheYAGuy

I'll DM you for your mailing address and mail your bag right out to you, so you'll be able to carry your copy of FREEFALL (and anything else you want to carry) wherever you go!
Posted by Joshua David Bellin at 4:50 PM No comments: