YA Guy Reviews... DIG TOO DEEP by Amy Allgeyer!

YA Guy recently signed up on Netgalley, and this is my first review based on a book I read via the e-ARC service: DIG TOO DEEP, Amy Allgeyer’s debut YA novel about one teen’s crusade to end mountaintop coal mining in a small Appalachian community. 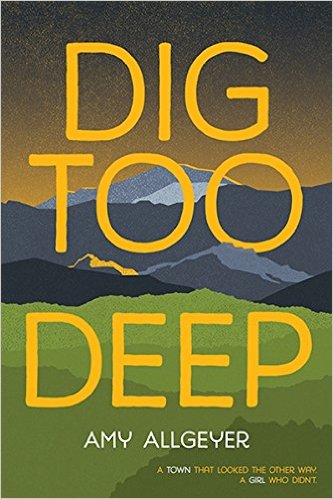 When seventeen-year-old Liberty Briscoe’s mom goes to jail for an environmental protest that resulted in a bombing, Liberty moves from Washington, DC to Ebbottsville, Kentucky, to live with her maternal grandmother. There she discovers a landscape devastated by mountaintop removal coal mining, and a town too fearful of--as well as reliant on--the mine’s unscrupulous owner to question the strange orange water and mysterious illnesses that have appeared ever since the mining operation began. Liberty’s own grandmother has sickened, and while Liberty struggles to care for her granny while keeping her grades up and putting food on the table, she begins to uncover the toxic secrets the mine has tried to bury. Will she follow in the footsteps of her mother, a woman so busy defending the lives of strangers she never had time for her own daughter? Or will Liberty find ways to protect her own family while reaching out to confront the problems of the wider world?

DIG TOO DEEP is a powerful story about family, the environment, and discovering the courage to fight for what’s right. The Appalachian setting is well realized, and the growth of the main character from angry and somewhat self-centered teen to tireless advocate is exhilarating. Many themes are woven into the novel alongside the more obvious environmental ones, including the strength of mother-daughter relationships, the struggles impoverished individuals and communities face, and the value (as well as the difficulty) of discovering one’s true friends. I was particularly moved by Liberty’s tender relationship with her granny, and I was impressed by Allgeyer’s avoidance of bathos or preachiness in a story that could easily have given way to either.

If I have one reservation about the book, it’s that the resolution was a bit too neat; powerful industrialists such as the mine owner in this story seldom leave so much incriminating evidence in such obvious places. (I wish they did; there’d be a lot fewer of them out there wrecking the environment.) But that’s partly a factor of the book being YA, a genre that tends to simplify complex political issues in the interest of a satisfying resolution, and it doesn’t detract from the story’s many strengths.

DIG TOO DEEP comes out on April 1, 2016. With any luck, I’ll be able to post an interview with the author on the blog around that time. Meanwhile, I’m recommending that you all run out and dig up a copy!

Posted by Joshua David Bellin at 5:59 PM No comments:

The question of whether authors should charge for their appearances is a big one. Many authors maintain that it's degrading to the profession of authorship to expect authors, almost alone among working professionals, to offer their services for free. Yes, lawyers do pro bono work and such, but no one expects them to work for free always and everywhere. Some folks seem to expect authors to do just that.

On the flip side, others in the field (authors, agents, publishers, publicists, etc.) will argue that exposure for an author, especially one at an early point in her/his career and/or not published by a major house, is so valuable that no opportunity should be passed up, even if it's a freebie. (In fact, this might be why some venues are shocked when authors ask to be paid; they're probably assuming that the exposure is worth it in itself.) According to this logic, alienating a prospective client or losing potential appearances by demanding payment is a big no-no.

YA Guy's been doing this author thing for over a year now, and I've spoken at many venues. Some have paid me, some haven't. For what it's worth, I offer the following thoughts about when it's appropriate to expect payment and when it's okay to work for free. These are based on my own experiences and instincts, mind you, so you shouldn't feel as if these suggestions are written in stone.

Bookstores. Unless you're a mondo gigantico bestseller--and even if you are--you're probably not going to get paid for bookstore appearances, and that's fine. This is one of those instances where the exposure, sales, and interaction with paying customers are sufficient unto themselves. Plus, you can often make contacts at such events that lead to other, paid gigs.

Schools. Personally, I believe schools should pay authors for their time. (Not only for physical visits but for Skype sessions.) The reality, however, is that not all of them do (or at least, not all of them will offer to pay up front, and some will get miffed if the author asks to be compensated). In some cases, this is a simple budgetary matter; some schools are financially strapped, and they genuinely can't afford to pay. In other cases, there might be less savory explanations. But to me, having some quality face time with my target audience--by which I mean not only students but teachers and librarians--makes a freebie worth it. So I always ask to get paid--or, failing that, to have the school order a certain quantity of my books--but I don't turn down a school gig just because they can't pay.

Libraries. In my experience, they seldom pay, or if they do, it's a mere pittance. I believe this is because libraries are chronically underfunded, not because they're clueless; librarians, of all people, recognize the value of a writer's time and labor. But as with schools, the opportunity to chat with young people and schmooze with librarians makes a free visit worth it to me, not only in terms of possible sales but because it's what I like to do. So I ask for money, but I don't turn down an unpaid gig.

Festivals. Unless you're the headliner, forget it. The point of being there is to sell books; no one's going to pay you on top of that. (In fact, the likelihood is that you're going to have to pay to have a table there.) Ditto with conferences (unless, again, you're the headliner). Don't bother asking; you'll look like a rookie and a doofus (not to mention a megalomaniac) if you do.

Colleges. These folks should pay you. They have money, and if they're the kind of place that wants authors on campus, they're the kind of place that values authorship enough not to be shocked if you ask for money. I recently sat on a thesis defense committee at a local MFA program, and they paid me, as is entirely proper. The only exception you might make here is if a student group asks you to speak on campus; then you might need to explore their budgetary situation.

Professional organizations. I recently gave a talk for the Western Pennsylvania chapter of the SCBWI (Society of Children's Book Writers and Illustrators). I didn't ask, or expect, to get paid (though they did give me a B&N gift card). To me, this kind of appearance falls under the category of professional courtesy or obligation, and I wouldn't insist on payment.

Media. Radio, TV, podcast, etc. Obviously, if you're appearing on some major TV talk show, they're going to pay you. Otherwise, not. That's journalism, and it would be pointless to ask the local radio station to pay you for being interviewed on their morning show.

Miscellaneous appearances. Such as, you've been asked to give a keynote address somewhere or other, or to be part of a lecture series, or anything of that nature. There's no doubt in my mind about this one. Payola!

So those are my thoughts. As with just about everything in writing, each author has to find what they're personally comfortable with. (Nor are you locked into a particular course forever; just because you didn't charge for school visits this year doesn't mean you can't change your mind next year.) Determine how much your time is worth to you, how much you enjoy or gain from appearances, and develop your own guidelines accordingly. The only thing I'd say as an absolute is that you should never, EVER feel guilty about asking for money. This is your job, or one of your jobs. You're a professional with a highly desirable and relatively rare skill set. You write for love, sure, but you write for money too. There's never any need to apologize or feel bad for that.
Posted by Joshua David Bellin at 9:00 AM 6 comments: