YA Guy's always been a voracious reader. (Like, what author isn't?) Though there are certain genres I've focused on--YA and science fiction, most obviously--I've dipped into lots of others over the years, including biography and memoir, travel narratives, epic fantasy, mystery, and many more. I'm too restless a reader (and writer) to exclude anything!

So now, I find myself reading historical fiction, something I haven't done much of in the past. My new fascination with the genre is largely due to the fact that I've begun to write a historical novel myself, centered on Thoreau and his relationship with abolitionist John Brown. I'm discovering that there's some really good stuff out there, and while I'm in the thick of it, I thought I'd share it with you here.

Mr. Emerson's Wife by Amy Belding Brown. Ralph Waldo Emerson was married twice, first to Ellen Tucker, who died shortly after their marriage from tuberculosis, and then to Lydia Jackson, who bore him four children and lived with him through the rest of his life. This novel is told from Lydia's point of view, and it delves into the frustrations of being a woman in the nineteenth century, even (or especially) when one is the wife of a famous man. Though it's a bit disconcerting to delve into Emerson's intimate life, the book does a good job of humanizing characters whom most people think of as pure symbols or icons.

The Good Lord Bird by James McBride. There are many novels written about John Brown, and this one, which won the National Book Award, is well worth reading. Purporting to be the narrative of an escaped slave who rode with Brown in Kansas and survived his raid on the federal arsenal at Harpers Ferry (no such person actually existed), the novel seeks to deflate the Brown myth through comedy and satire. I wasn't crazy about that at first, but the book gains richness and resonance as it goes on.

The Invention of Wings by Sue Monk Kidd. Told in alternating points of view by Sarah Grimke, a southern slaveholder who became an abolitionist, and Handful, one of Sarah's slaves, this Oprah's Book Club novel does an excellent job of portraying the lives of antebellum women, black and white. For me, it bogged down a bit in the middle with its focus on Sarah's romantic entanglements, but it picked up thereafter, weaving other historical figures expertly into the tapestry of Sarah and Handful's lives.

Raising Holy Hell by Bruce Olds. Another John Brown novel, this one a kind of postmodern pastiche that combines actual quotations, newspaper clippings, slave laws, and other historical material with an inventive, fictionalized portrait of Brown. While I didn't agree with the author's representation of Brown as a complete madman, I found the technique intriguing.

Woodsburner by John Pipkin. Based on an actual event in which a young Thoreau accidentally burned down part of the Concord woods he so loved, this novel felt particularly well researched to me. Its cast of characters includes not only Thoreau but an opium-addicted minister and a businessman who discovers the new art of photography (and thereafter trades in pornographic images). You'll have to read it yourself to see how all of these strands tie together!

Cloudsplitter by Russell Banks. Yet another John Brown novel, this time narrated by Brown's son Owen, who accompanied his father to Virginia but stayed behind at Harpers Ferry and thus survived the raid. I haven't finished this book, mostly because it's nearly eight hundred pages long (!!!), but it promises to be another good read.

So there you have it! If you know of any other good historical novels--especially ones focusing on Thoreau, Brown, the Transcendentalists, and/or antebellum slavery--drop me a line!
Posted by Joshua David Bellin at 9:50 AM No comments:

YA Guy Celebrates... SURVIVAL COLONY 9 in paperback (plus a giveaway!) 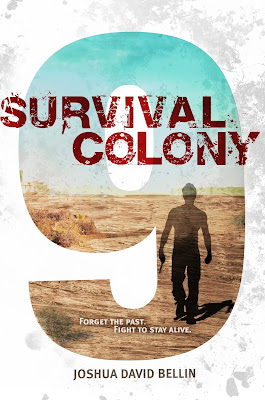 The paperback edition of SURVIVAL COLONY 9 comes out September 1, and to celebrate, YA Guy’s offering some goodies to readers. Here’s how it works:

Enter the Rafflecopter giveaway below. Provide me your mailing address in the free entry tab, and I’ll send you signed SC9 swag (bookmarks, postcards, and bookplate)!

But wait! It gets better. You’ll also be entered in a grand prize drawing to win one of three signed copies of the SC9 sequel, SCAVENGER OF SOULS, which releases in summer 2016!

And it gets even better! For each of the next three Rafflecopter options that you select (following me on Facebook, Twitter, and my blog), you’ll get an additional entry for the grand prize drawing!

Okay, now you’re saying, “it couldn’t get any better,” right? But you’d be wrong! If you preorder a paperback copy of SURVIVAL COLONY 9 before the September 1 release date (from Amazon, B&N, IndieBound, or any other retailer), you’ll get FIVE additional entries for the grand prize drawing! All I need you to do is select that option on the Rafflecopter giveaway and then send proof of purchase (screen capture, jpeg, etc.) to joshuadavidbellin@gmail.com, and you’ll get the extra five entries.

The contest runs from today until the day before the paperback release date: August 31, 2015.

So, what are you waiting for? There’s only a month left!

a Rafflecopter giveaway
Posted by Joshua David Bellin at 9:00 AM 2 comments: