YA Guy's been writing novels for over forty years.

Well, that's not entirely true. I started writing novels when I was a bit under ten, and I'm a bit over fifty now, but I didn't complete a novel until I was sixteen, and I took a major break from novel-writing between graduate school (when I was in my early twenties) and my mid-forties. Plus, you know, I take the occasional break to eat, sleep, spend time with my kids, and so forth.

But my point is, I've been writing for a long time. And particularly in the past five years, from the completion of the first draft of Survival Colony 9 in 2011 to the publication of Scavenger of Souls just last week, it sometimes feels as if I've been writing nonstop. No sooner have I completed one project than I've moved on to another. That's the writing life: you're either working on one thing or promoting something else (usually both at the same time). It's relatively easy work physically, but it can be exhausting mentally and emotionally.

So I've decided to take a little break. Roughly four months, to be precise. From now until the beginning of 2017, I won't be writing anything new.

The timing is actually quite good. My daughter's a high school senior, so we'll be driving her around to visit colleges and so forth this semester. I'm teaching five classes (one more than usual), so there'll be a bit of a time crunch there. Plus I'm traveling some to promote Scavenger of Souls, so that's another time commitment. I've heard back from my editor about my forthcoming YA science fiction novel, Freefall, and she wants only minor changes, not any major rewriting. And I'm scheduled to have a sabbatical this coming spring, so for a solid four months I'll be able to devote the full workday to my current work in progress, the YA historical horror novel I'm calling Polar.

When I resumed writing novels five years ago, I had no idea how much work it would be. How could I? Like many novice authors, I had the illusion that I'd write a book, it would become an instant bestseller, and I'd be able to sit back and collect royalty checks while leisurely producing my next classic.

When I told my agent, with some trepidation, that I'd be taking a little break from writing, she had this to say:

I support this 100% and am here whenever you are ready. Writing ebbs and flows and I totally respect that you need time to revitalize. Do what you want to do – take your time – write when the mood strikes and know I am always here!

So now you know, for one, why she's my agent. But you also know why I needed this break. Writing does ebb and flow; authors do need time to revitalize. Much as I respect those writers who seem able to work pretty much nonstop, I'm not one of them. Each writer needs to recognize his/her own strengths and needs and limitations; otherwise, you run the risk of burning out for good.

I'll still be blogging from time to time--when the mood strikes--and you'll probably see me around on Twitter or Facebook or live and in person. I hope you'll read Scavenger of Souls, and I hope you're looking forward to Freefall. Down the road, I'm sure you can expect more from me, starting with Polar and moving on from there.

But for now, YA Guy's taking a break.
Posted by Joshua David Bellin at 6:39 PM 4 comments:

YA Guy Announces... The SCAVENGER OF SOULS blog tour!

YA Guy's beyond thrilled to announce the official blog tour for SCAVENGER OF SOULS, which releases on August 23!

Here are the great bloggers who are participating in the tour:

On these blog stops, you'll find interviews, reviews, and an excerpt from the book, and you'll have a chance to enter a giveaway to win a signed copy of SCAVENGER OF SOULS plus swag (bookmarks and T-shirt)! Here's the Rafflecopter giveaway, which will also be available on the above-named blogs:

The Scavenger awaits! Let the tour begin!
Posted by Joshua David Bellin at 9:00 AM 4 comments:

YA Guy Reviews... THE RECKONING by Chris Howard! 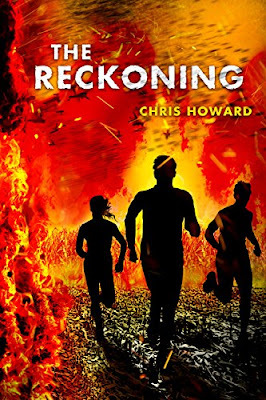 YA Guy's been saying it for years: Chris Howard is one of the most inventive and original writers in YA science fiction.

I hope people have been listening.

Howard first caught my attention with ROOTLESS, the series opener in a post-apocalyptic trilogy about a future Earth without trees and the young man, Banyan, who builds facsimiles thereof. Ingeniously bizarre--bordering at times on the Boschian grotesque--and written in a voice like none other, ROOTLESS convinced me that Howard was something special.

It was a long while before the next book in the trilogy, THE RIFT, appeared. That one upped the ante on its predecessor, giving us such gleefully weird imagery as a man with trees for legs, resuscitated mammoths with purple fur, and upside-down mountains under which strange dreams are dreamt. I waited an even longer time for the denouement, THE RECKONING; in the meantime, Howard put out another book, NIGHT SPEED, narrated by a teen who's hooked on the drug she takes to chase down criminals who've been given superhuman strength and speed by the same drug. Make no mistake, Howard doesn't tell neat or easy stories, and he doesn't cleave to formula. He writes his own thing, and leaves it to his reader to decide.

THE RECKONING, it must be said, wasn't my favorite book of the ROOTLESS trilogy; I'd probably give pride of place to the first book, if only because it so blew me away when I read it. (But then, that's the way it often is with trilogies; THE HUNGER GAMES is the best book of the three, as is THE MAZE RUNNER.) THE RECKONING drags a bit in the first third, as lots of exposition gets packaged as dialogue; conversely, the final third feels rushed, with the action taking place in a city we've waited the whole trilogy to visit but then don't spend enough time exploring. Part of my disappointment, I'm sure, stemmed from the fact that I knew this was the last time I'd have the chance to sink into this particular world, and so I set the bar impossibly high. Notwithstanding, I still loved THE RECKONING, and the trilogy as a whole remains a personal favorite.

So I'll say it once more: Chris Howard is one of the most inventive and original writers in YA science fiction.

I hope people are listening.
Posted by Joshua David Bellin at 6:02 PM No comments: